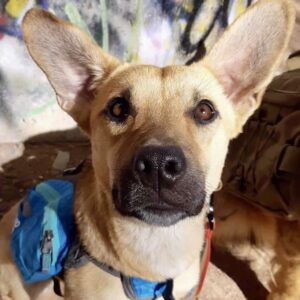 Kids?
Good with kids
Other Dogs?
No, best as only dog
Cats?
Not Advised
Yard?
Not Required
Activity Level:
Medium
Housebroken?
Yes

Jason has been at training for a week, and despite all improvements, that one ear won’t fall in line (we will let you decide which ear is the problem!)

Jason is a super smart boy, who really likes people and just hanging out. In his foster home, he really loved his time with kids, and was very respectful in his interactions with him. With his humans he loves belly rubs, a good game of catch, exploring on walks, and ear scratches are his favourite things in life. There’s nothing quite like playtime, followed by a nap in the sun.

In training, he initially tested his boundaries with bossiness – with other dogs and with humans in the home. His recent update was “He loves food! He is also very friendly with people, but he can forget his manners if he’s too excited. Even though he had some time to play with the other dogs, he’s definitely more introverted. Just lay in a little spot of dirt and sunbathed around the other dogs when we had playtime!”

He is not good with cats, and at times has shown prey drive while on walks, but this has been remedied with guidance and instruction. In fact, Jason is happiest once he understands the guidelines. (Actually, this is true for all dogs, Jason just makes it be known!)

We’ve thought a lot about his future home, as we want to ensure his education continues and he isn’t allowed to become that bossy version of himself. He is not a beginner’s dog, as he needs a family with confidence and a passion for training. As an introvert, he isn’t going to enjoy being put into super social situations (ie dog parks, or family cottages with tons of dogs around). We think he’d appreciate hikes and a peaceful life, vs the city experience. He is fine with dogs once they establish mutual respect, but he will be great as the only pet in the home. Bonus, he is housetrained!

If Jason sounds like the canine pal for you, check out the adoption process and application at www.dibsrescue.com. His adoption fee is $750. If you are a family with kids, please check out our resources on kids and dogs before you apply (https://dibsrescue.com/kids-dogs/).