If you have had a puppy, you may have experience with a dog with Giardia! But if it’s new to you, let us share what we know!

Who: Puppies or unhealthy dogs are more suseptable due to a weakened immune system and healthy adults tend to fare better. 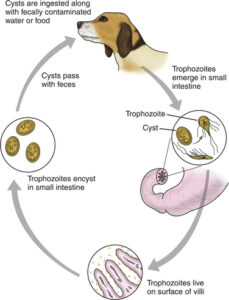 What: It is not a worm, bacteria or virus, but is instead a parasite. In people, it is what we often refer to as Travelers Diarhhea. It’s basically a parasite spread by fecal matter.
When: Giardia will flare up 5-12 days after ingestion. It’s most commonly spread during puddle season, as our dogs tend to love to drink out of puddles that other dogs have walked through. As it’s spread via poop, a rainy day will spread a pile of poop to a larger area.
Where: Worldwide!  This is an everywhere issue. Our bodies are not meant to ingest poop, so giardia can be in any country where a dog may poop.
How:  Injesting fecal matter.  Treatment is typically metronidazole or fenbendazole, and are  normally given for three to ten days to treat giardiasis.

Many dogs may never show signs of infection!  But the most telling sign is the look and smell and frequency of bowel movements. The diarrhea may be intermittent, acute or chronic. Take it from us: this poop looks different! There may be slime and mucusy blood. (google it!)  And, the smell! It’s in a league of it’s own (so when you know, you know!).  Some secondary symptons could be, weight loss, failure to gain weight, vomiting, dehydration, poor coat appearance.

We find that most of our dogs may have an upset stomach (aka funky poop) for a few days after they arrive.

Do know, we are not vets. We are just foster parents that have seen this a few times and have shared stories amongst each other. If your dog has funky poop, it may be giardia, but don’t panic!  A trip to the vet and some meds will get them back on track!  A good diet and lots of exercise will get your pup healthy and beef up their immune system.

Here are some of the recent articles we have referenced: do check them out!  And talk to your vet about it, if you suspect giardia!