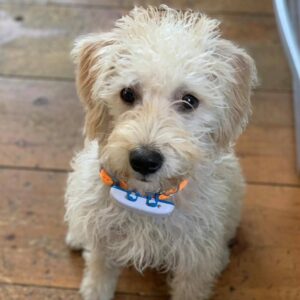 Kais is part of our foster to adopt program and we are not accepting more apps at this time!

Meet Kais! This adorable scruff’s journey began when a kind soul found that he was being sold online, and paid to rescue him so he wouldn’t end up in the wrong hands. Now this lucky boy is getting ready to come to Canada to find his forever family.

Kais is awesome! He is a lovely, social young fellow and a bit of a lap dog too. Like most dogs his age, he is also very playful. He loves hanging out with other dogs, especially when there are toys involved! Puppies like Kais do best when they have a canine sibling in their home – one who can act as a mentor as well as a young playmate to help them burn off some energy. So, his future family will include an existing dog pal. Even though he loves humans, Kais can be a bit of an escape artist. He will need a secure yard to explore and a watchful eye to make sure he does so safely. He can sometimes jump when he’s excited, so older, dog-savvy kids only.

We are waiting on videos to see Kais in action and to learn more about how he is with cats.