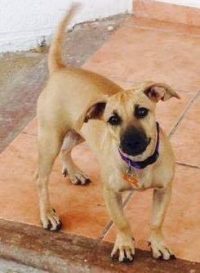 This cute girl was found as a street dog, trying her best to survive on scraps. When rescued (from the middle of the road) she was terrified of people and cried and fussed. Right after her rescue, she would still cry when meeting new people, but she is now over it. She loves people, cats and dogs! She is re-living her puppy-hood a bit: loves toys, balls – pretty much anything she can chew on.
She is described as very very affectionate, and loves to play – a dog playmate would be a bonus for this cutie.