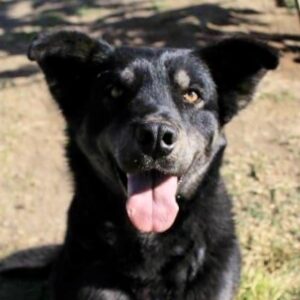 Wookie was rescued out of a very poor nieghbourhood in Mexico with a shockingly severe machete wound to his neck. Even though it was a human who attacked him so brutally, he still finds it in himself to love all people. After recovering at the rescue centre, Wookie has slowly come out of his shell and shown himself to be super playful and loving. His favorite activity – fetch! He’ll even drop the ball in front of you! His second best thing is to be with his humans to get lots of kisses and cuddles. He can be a little shy at first but as soon as he realizes he is safe, he will approach. He also loves to play with dogs and humans. He gets along wonderfully with kids too, especially if they’ll play fetch with him. He walks quite nicely on a leash, and is gentle enough for an older child (not toddler) to walk him.

As long as you’ll give him lots of love and play fetch with him, he will love you right back and show you endless amounts of gratitude through kisses and cuddles. If you’re that family, please consider giving this beautiful dog a forever home.